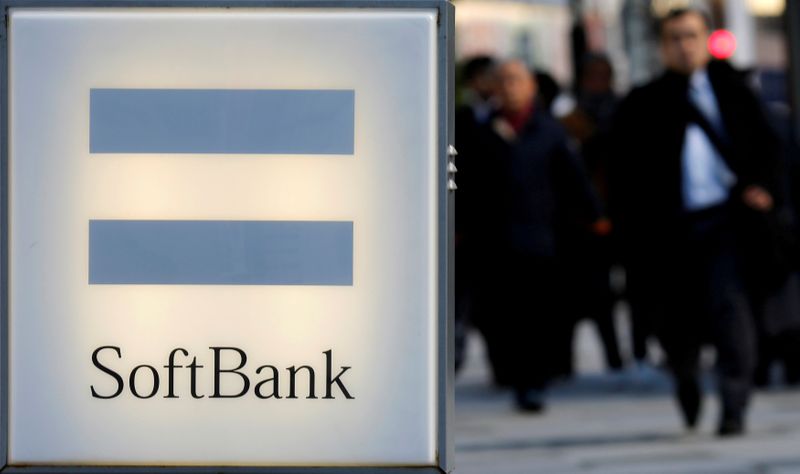 © Reuters. People walk behind the logo of SoftBank Corp in Tokyo

Chief Executive Masayoshi Son in August said the firm would park excess cash from asset monetisation in tech stocks and derivatives in at attempt to capitalise on an uplift in valuations in the sector.

The bets, which come as SoftBank hopes to reestablish its investing chops after portfolio companies struggled, turned sour after the firm booked a 292 billion yen derivative loss.

On a brighter note, the group also reported that the investment portfolio of its mammoth Vision Fund was no longer worth less than cost due to a broad upswing in tech valuations.

Vision Fund’s $75 billion investment in 83 startups was worth $76.4 billion at the end of September, the company said in a filing.

The group has dropped operating profit as a performance metric, citing a shift away from running businesses to tech investing.

The firm said net income attributable to shareholders was 1.88 trillion yen in the six months through September, a more than four-fold increase from the same period a year earlier.

That primarily reflected a gain related the merger of portfolio firm Sprint with T-Mobile US (NASDAQ:) Inc, it said.

The Japanese conglomerate has been selling down core assets such as stakes in Chinese e-commerce giant Alibaba (NYSE:) Group Holding Ltd and domestic telco SoftBank Corp to raise cash to weather the COVID-19 pandemic.

It has used some of its cash to invest in U.S.-listed stock and equity derivatives as well as buy back shares.

The buybacks have pushed its stock price to record highs yet the persistent gap between SoftBank’s market capitalisation and the value of its assets has left frustrated executives mulling plans to take the group private, Reuters reported in September.

Conversely, it is planning to list a blank-cheque company to attract outside investment to its Vision Fund, in a sign of returning confidence after a string of soured investments shook the group’s earnings, a source said last month.