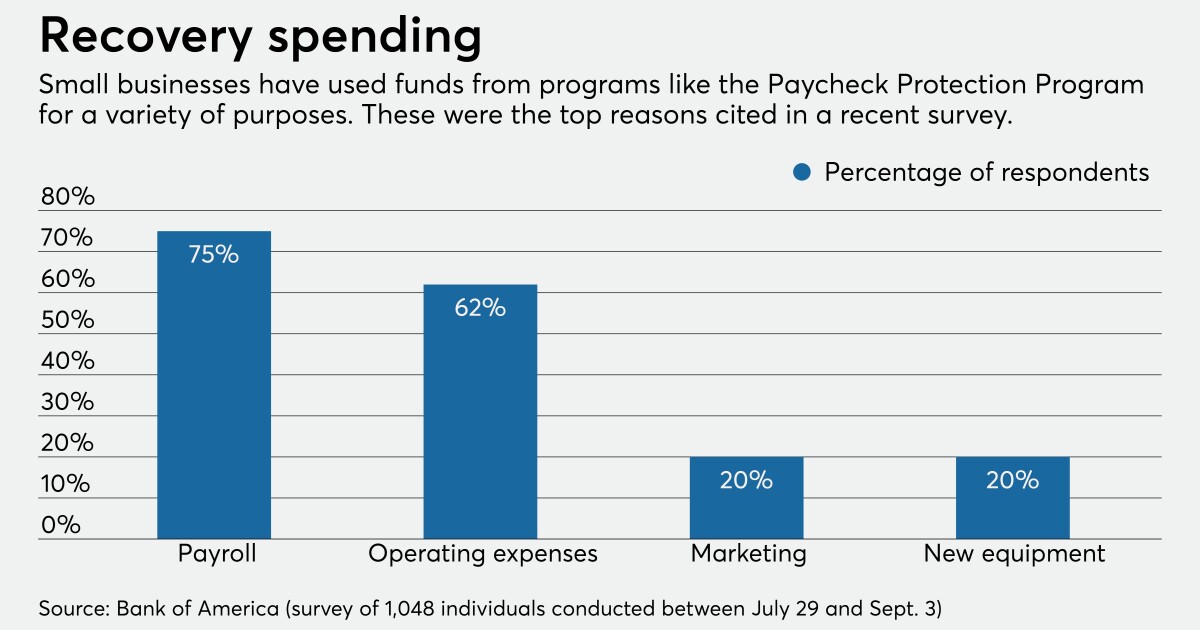 Small-business owners remain cautious about their growth prospects in 2021.

A survey of 1,048 individuals, conducted by Bank of America between July 29 and Sept. 3, found that more than a third of respondents expect the national economy to improve next year and nearly 40% have the same view of their local economy.

But many of the respondents have a tempered view of their own operations.

About two-thirds expect revenue to be flat or down next year, and only 13% plan to be in hiring mode.

Bank of America, which has been conducting the survey since 2012, said the revenue and hiring projections represent lows not seen in more than eight years.

Still, the survey found some cause for hope.

About 60% of participants said they expect the pandemic’s economic dislocation to last fewer than two years, and 15% said their businesses had been unaffected. A third of the small-business owners said they received loans under the Paycheck Protection Program, while two-thirds said debt forgiveness would speed recovery.

Those responses were “encouraging,” Sharon Miller, Bank of America’s head of small business, said in an interview. “Entrepreneurs in general are resilient. They’ve got a very positive spirit. I think even though things are tough right now, as they look forward, they see clearer path to growth.”

The Small Business Administration, which is administering the PPP along with the Treasury Department, has offered streamlined forgiveness to borrowers with loans of $50,000 or less. Groups representing lenders and borrowers continue to push for a higher threshold. Most are seeking blanket forgiveness for loans up to $150,000.

While Miller stopped short of advocating a higher threshold, she said forgiveness would play a key role in the recovery.

“For anyone that has gone through the PPP process, part of it is getting forgiveness,” she said. “As far as speculating on what the requirements might be, we’re going to follow them whatever they are, but forgiveness is important.”

Bank of America was the leading PPP lender by number of loans, approving more than 343,000 for $25.6 billion.

The release of the survey’s findings comes as fresh negotiations among lawmakers in Washington have revived hopes for a new round of stimulus, including proposals for more streamlined forgiveness. Two-thirds of the survey’s respondents cited relief programs for small business as crucial to a recovery.

“The stimulus was important,” Miller said. “That bridge for business owners we felt was very important.”

Banking advocates have been quick to press lawmakers to work out a deal.

“We applaud these bipartisan efforts to provide additional COVID-related stimulus — including streamlined PPP forgiveness for the smallest businesses in the country,” Richard Hunt, president and CEO of the Consumer Bankers Association, said in a Tuesday press release.

For Miller, probably the biggest surprise from the survey was that 85% of respondents, in “some form or fashion,” stayed open throughout the pandemic.

“What we found in our survey was more than four in five businesses remained open,” Miller said. “Some of them were critical businesses, but many just adapted. I do think that was higher than maybe I would have expected based on some of the news reports. … I thought that was a bit of good news, as well.”

Testy Tuesday – Dropping Below the Lines