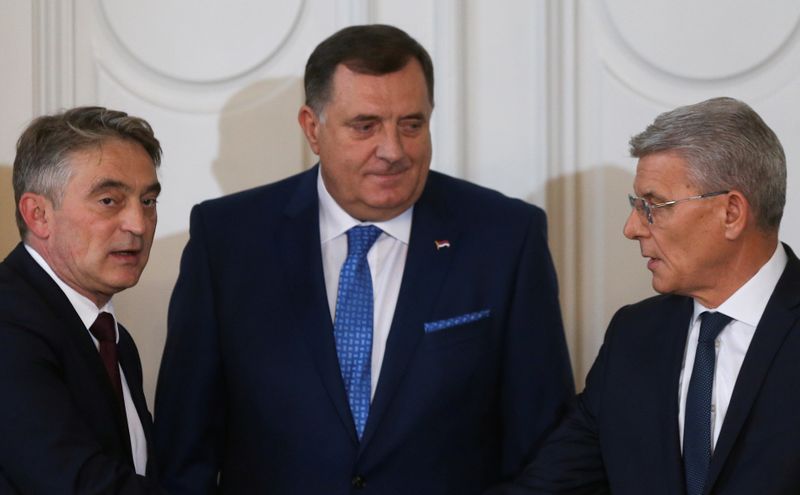 Lavrov, whose nation is a champion of Serbian interests in Bosnia and the wider Balkans, met the Serb member of the presidency Milorad Dodik on Monday and again on Tuesday.

Croat presidency member Zeljko Komsic said the first meeting, in the Serb Republic’s government office just outside the capital Sarajevo, was insulting as no national flag was on display despite the Russian being on an official visit.

“Mr. Lavrov, as one of the worlds’ three top diplomats … is sending us a message … which we interpret as disrespectful and a denial of the state he is visiting,” Komsic told reporters.

He and Bosniak Muslim presidency member Sefik Dzaferovic did not attend a planned meeting with Lavrov at the presidency building in Sarajevo, where the Russian met Dodik again.

“We are aware that we are small and weak, but we are not ready to be a hostage in any kind of games by Russia when it comes to their relations with the European Union and NATO members,” Komsic said.

Lavrov also urged the closure of the office of an international peace overseer, set up as part of the U.S.-brokered Dayton accord to end Bosnia’s war 25 years ago, saying foreign protectors should have left long ago.

Under the peace deal, Bosnia was split into two autonomous regions, the Serb-dominated Serb Republic and the Federation shared by Bosniaks and Croats, which are linked via a weak central government.

There was no immediate reaction from Lavrov or the Moscow government to Komsic’s comments.

Some Coloradoans Want to Break Off and Join Wyoming. They Should at Least Get to Vote On It. | Ryan McMaken

Roundup of crypto hacks, exploits and heists in 2020

What does the minimum wage literature really tell us? – Marginal REVOLUTION

Some Coloradoans Want to Break Off and Join Wyoming. They Should...