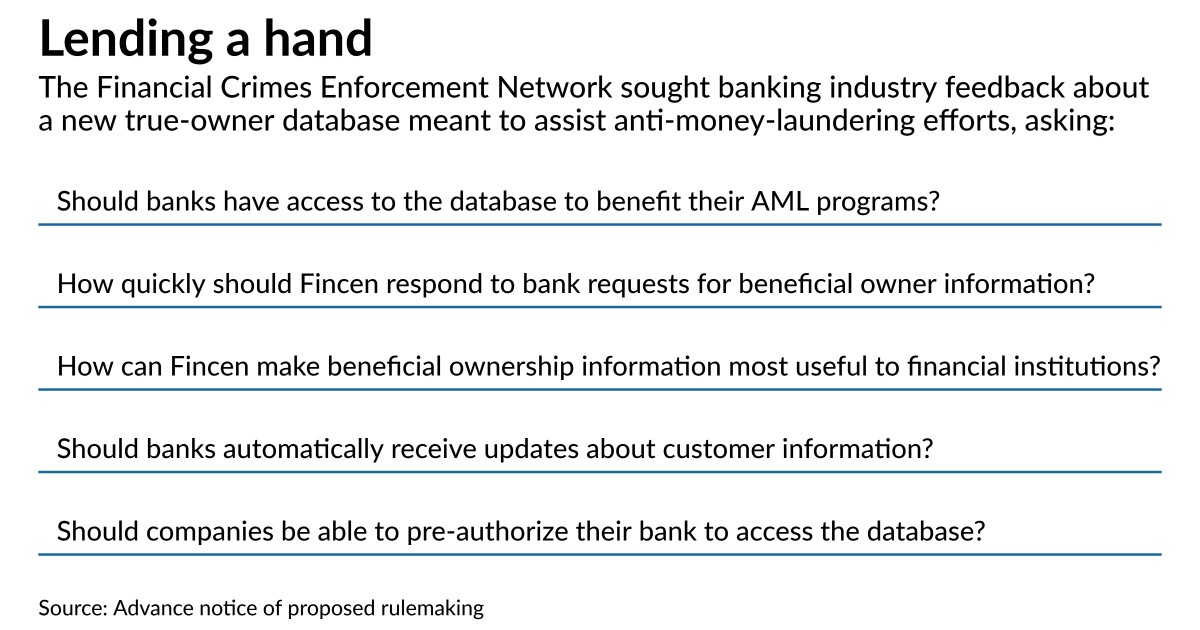 WASHINGTON — As the Financial Crimes Enforcement Network seeks public comment on developing a registry to crack down on anonymous shell companies, banks are anxiously awaiting relief from anti-money-laundering reporting burdens.

Fincen has begun the process of implementing a law enacted in January requiring companies at incorporation to report their beneficial owners to the agency, which will put the information into a new database. Banks applauded the bill since it will relieve them of current requirements to report their business customers’ true owners to Fincen.

But the key question for the industry — following the release of the agency’s advance notice of proposed rulemaking — is how quickly and to what extent will Fincen ease the customer due diligence rule now imposed on banks. Until that happens, account holders could be reporting their true owners both to the government and to a financial institution.

“You don’t want Fincen just duplicating the work that banks have to do,” said Paul Merski, executive vice president for congressional relations and strategy at the Independent Community Bankers of America. “You want to be able to reduce the reporting requirements for banks.”

Fincen published the rulemaking notice in the Federal Register on April 5. It asked stakeholders over 100 questions about the process to implement the Corporate Transparency Act, seeking input on how the agency should collect beneficial ownership information as well as how banks should be able to utilize the information as they combat money laundering.

The notice comes as the Biden administration is requesting a $64 million increase in Fincen’s funding for fiscal year 2022, pushing the law enforcement agency’s budget to $191 million as it creates the country’s first national corporate beneficial ownership database.

Most analysts agree that there is real potential in Fincen’s beneficial ownership database to overhaul the way in which banks and law enforcement root out criminal activity within the financial sector.

“The beneficial owner database program really has the potential to be a game changer for the AML effort because it is going to give both law enforcement and banks potentially access to information that is more reliable and more valuable than what they’ve had before,” said Tim Treanor, co-head of the white collar criminal defense and investigations practice group at Sidley.

But the particulars of the database, as well as how the agency squares the new law with existing regulation, will ultimately decide just how helpful the Corporate Transparency Act will be for financial institutions.

“The million dollar questions are, first, is this is going to be something that will be used by financial institutions?” said Dan Stipano, a partner at Davis Polk. “And second, does it mitigate or add to their compliance burdens?”

Industry representatives, while optimistic, remain leery of any reform that doesn’t significantly lighten the requirements for banks under the nation’s AML regime. Merski said once Fincen constructs the database, bankers hope that their beneficial owner requirements in the CDD rule will be quickly revoked.

“The Corporate Transparency Act that we passed and worked on for many years was really to relieve the burden off of the banks for any of that reporting,” said Merski. “We want to ensure that the work is done between the small business and Fincen.”

The ANPR is mostly on the corporate entities responsible for registering with the beneficial ownership database in the coming years. But the policy outline, which consists of 48 numbered questions and many other sub-questions, includes several questions relevant to industries that will actually use the database, such as banks.

Fincen is seeking feedback on how banks should be able to access the database and for what purposes, how Fincen should communicate with banks about changes to their customers’ ownership information, and how to make the information in the database most useful to banks.

“It looks to me like they’re really looking for guidance, which is a positive,” Stipano said. “Having an opportunity to weigh in on how the database will operate and what it will look like — banks and other affected businesses really need to take advantage of that.”

But banks also want to know how Fincen will iron out legal differences between the Corporate Transparency Act and the existing customer due diligence regulations.

The new law directs Fincen to revise much of the framework around banks’ customer due diligence rules within a year of the database being operational. Congress required the database to be implemented by the beginning of next year.

“Until the existing customer due diligence rule is revised, and that won’t be for at least a couple of years, banks are going to need to comply with that rule,” Stipano said. “The definitions used in the CDD rule are similar, but not exactly the same as those in” the new law.

If the two regulations are not in sync, banks may have to contend with conflicting legal definitions.

“Fincen is going to put out a conforming regulation that should align those definitions, but if they don’t, you could have situations where a legal entity is covered under one law but not the other,” Stipano said.

Another key area of concern for banks will be the way in which Fincen plans to verify any data that is put into the database. While the law itself does not stipulate that the information must be verified, analysts say it will be essential that regulators have a process in place for making sure information is accurate.

“The CTA requires reporting companies to provide beneficial ownership information to Fincen. It does not address verification of that information by Fincen,” said Ben Hutten, counsel at Buckley. “The question is whether the verification task is going to be passed onto financial institutions, and if so, what will they be required to do?”

Other analysts say that no matter how Fincen structures the rules that govern the database, banks will likely have to remain involved in the process in some way.

“Bottom line, I don’t know that this is some great victory for the banking industry,” Stipano said. “Maybe it’ll turn out that way. But when I think about the practical realities, at best it may be a wash or at worst may add even more burden.”

FHA will not cut premiums amid rising delinquencies