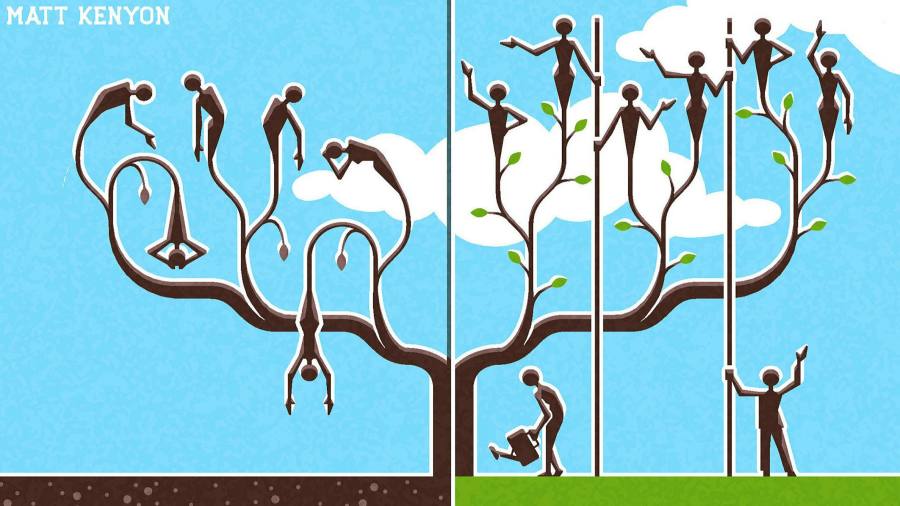 If America is lucky, within a few days, we will have elected Joe Biden as president. If Donald Trump goes, I suspect the majority of the country will breathe a sign of relief, literally. Whether or not one agrees with the president’s policies, his divisiveness and vitriol are among the reasons that researchers have found correlations between Mr Trump’s spell in power and things like rising anxiety levels, cardiovascular problems and even preterm pregnancies (especially among Latinas) in the US.

There couldn’t be a better time for the “caring economy” that Mr Biden has advocated. Politics under the current administration are literally killing us.

I say this as a Democrat, but also as someone who believes that this administration did one thing right — it exposed the fact that neoliberalism, characterised by the laissez-faire model of economic development, is dead.

For the past four decades, under both Republican and Democratic administrations, America has bought wholesale into the idea that as long as capital, goods and labour could travel unimpeded across the globe, everyone would benefit. This philosophy has failed, putting liberal democracy itself in jeopardy.

Neoliberal policies, including financial deregulation and trade deals that looked good on paper but didn’t take into account the human cost, decreased inequality at a global level. But they also created huge pockets of economic and social pain in many countries. That pain resulted in the politics that we have today. Capital travelled freely, all right — the world’s financial assets are now more than three times larger than the real economy. Goods were relatively mobile. But most people, and jobs, were not. The problem for policymakers is that people vote.

We can no longer deny the fact that the fortunes of multinational companies and those of workers do not rise in tandem. Markets are not perfectly efficient. Politics and people matter. The world is a messy place and it is becoming more complicated, as the US, Europe and China become separately orienting poles for different countries, each with separate political economies.

China isn’t going to become more like America, particularly in the wake of the 2008 financial crisis and Mr Trump’s disastrous handling of Covid-19, which is as good an advertisement for autocracy as the Communist party itself could come up with.

Indeed, economic figures never really indicated that it would. According to Gavekal Research, the state sector has been roughly stable as a percentage of the economy in China (between 25 and 28 per cent) for the past two decades. Rhetoric about privatisation and liberalisation rises and falls, but the Chinese have a system that will remain firmly controlled by the party, and be run in the interests of their country, which is now a producing and consuming nation to rival the US. The “one world, two systems” problem will be with us for a long time to come.

What should the next US president do to respond to all these changes and challenges? Certainly not engage in an ill-advised and poorly designed trade war coupled with corporate tax cuts. As economist Paul Krugman lays out, the result has actually been an increase in trade deficits. Not only could corporations continue to play the capital shell game and move money around the world rather than investing it in the US, but policymakers failed to think through how tariffs themselves might work in the current economic paradigm. No company is going to suddenly build a bunch of factories in the US if they don’t believe in the fundamental growth prospects and stability of the nation. And they don’t need to, because most new businesses in the digital age don’t require that kind of investment.

What the US needs is not a blame game with China. It is serious work at home. If elected, Mr Biden should be frank with the American people and say what we already know in our gut to be true. Education has not kept pace with technology, a key reason productivity and growth has lagged behind. The US healthcare system is costly and inefficient. Roads, bridges and broadband systems need upgrading. Mr Biden’s multitrillion-dollar plan to invest in all of this is smart, because it would increase the value of human capital — the key resource of the 21st century economy. Companies should be able to depreciate investment in people as well as machines, as they do now.

Republicans will hypocritically try to scupper this by claiming that debt matters. For decades now, they’ve cut taxes but not budgets. They have tolerated high deficits when the GOP controls the White House. Ultimately, debt does matter. But the only thing that will reduce US debt levels is a combination of private austerity (already happening at the consumer level) and gross domestic product growth.

A trickle-down, neoliberal asset bubble fuelled by easy monetary policy will not create that. We need a productive bubble, encouraged by federal underwriting of basic research in high growth technologies such as clean energy, quantum computing and artificial intelligence. We also need strong antitrust enforcement to make sure the Big Tech groups don’t monopolise these key sectors. That would seed subsequent investment by the private sector.

This is basically the Biden plan, and it’s a no-brainer. The question for the US, and ultimately the world, is whether Democrats will have a chance to implement it.

How to conduct clinical trials while releasing a vaccine – Marginal REVOLUTION

Should I Use My 401(k) to Pay Off Student Loans? – NerdWallet