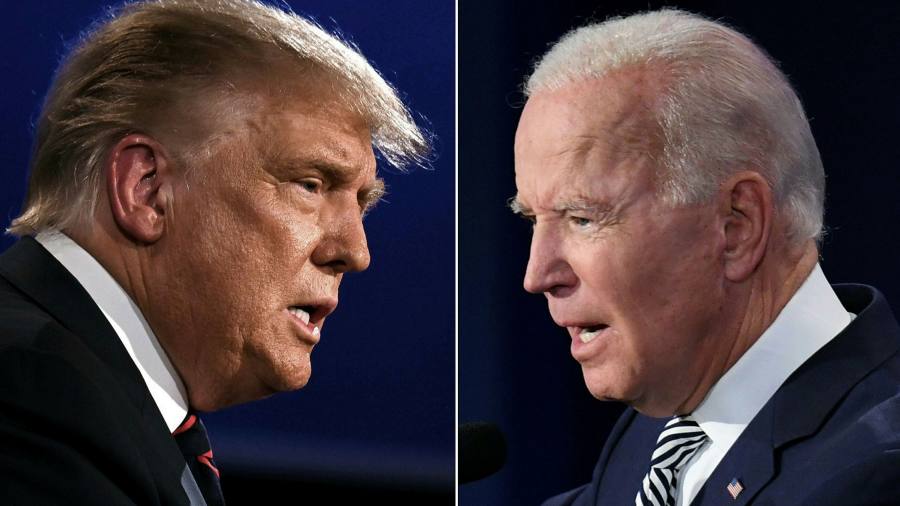 Elections are meant to resolve differences. But whichever of Donald Trump or Joe Biden prevails in the presidential race — at this point too close to call — will inherit a country in which roughly half the electorate rejects his legitimacy.

It could get worse than that. As in 2016, a US presidential count looks like it will boil down to Pennsylvania, Michigan and Wisconsin. The one wild card is that Georgia may also be in play for the first time since 1992.

The other big difference between now and four years ago is that it could take days to tally all the votes.

In the meantime, Republicans have already filed at least two election day lawsuits in Pennsylvania to contest the legitimacy of postal votes, Since a majority of mail-in ballots were sent in by Democrats, the fate of the Republican legal complaints could play a part in deciding who becomes the next president.

Indeed, Mr Trump promised in an early morning speech on Wednesday to challenge the continuing vote tallies in court. “Frankly we did win this election,” he said. “So we’ll be going to the US Supreme Court. We want all voting to stop.”

Moreover, the US postal service is still looking for 300,000 mail-in ballots that were processed but not scanned for delivery, including some in Pennsylvania and Wisconsin. The situation has the ingredients to turn into a protracted battle, like the month-long fight over Florida in 2000 that was ultimately resolved when the US Supreme Court halted a recount. No wonder Mr Trump is already claiming that “they are trying to steal the election” in a post that Twitter has marked as “disputed or misleading”.

How did it end up like this? Polls before the vote suggested that Mr Biden would win by a clear margin. There is a reasonable chance he will still win the electoral college once all the votes are counted in those three so-called blue wall states. Moreover, it looks like he is heading to a victory in the popular vote — probably larger than Hillary Clinton’s 2.9m margin.

But the race is far closer than any of the models predicted, including the Trump campaign’s internal numbers. The most cited forecaster, Nate Silver, gave Mr Biden an 89 per cent chance of winning (against 70 per cent for Mrs Clinton last time). Moreover, this was after pollsters made considerable adjustments to correct the undercounting of blue-collar white voters in the Midwest and elsewhere and take into account the way education affects voting patterns.

It looks like that was not enough. Mr Trump’s clear win in Florida was partly fuelled by a boost in his support from Hispanic and especially Cuban voters. Polls ahead of the election had given Mr Biden an average lead of more than two percentage points in the state.

It is possible the pollsters and forecasters have also overestimated the high Democratic share of the mail-in ballots that are still being counted in the three blue wall states. Mr Biden could afford to lose one, including Pennsylvania, and still win the election, but not more unless he makes gains elsewhere.

Either way, America faces two dangers, one immediate, the other structural. The first is that the judiciary may well get involved in deciding the outcome. Constitutional scholars have been warning about this for months. This is because of the order in which ballots are counted in the three key swing states.

Mr Trump, who did much better among voters who went to the polls on Tuesday, appeared initially to be heavily in the lead in each of the three. Dubbed the “red mirage” by political scientists, this lead is shrinking as the mail-in ballots are counted.

This gives Mr Trump a window to repeat his pre-election claims that mail-in ballots are fraudulent and petition to have some of them thrown out. The 2000 Florida recount was partly derailed by the so-called “Brooks Brothers riot” in which Republican protesters managed to stop the recount in one critical county. A repeat of that kind of incident cannot be ruled out.

Mr Trump is already laying the groundwork, saying in his Wednesday morning speech that the election “is a fraud on the American public. This is an embarrassment to our country.”

The second danger is to the legitimacy of the entire system. If Mr Trump wins the electoral college, it will be the second time he has done so with a minority of the vote and the third time a Republican has done so this century.

In other systems where the president is elected, Mr Biden would already have been declared the winner. America’s electoral college, which gives outsized influence to small, rural states, is like a dodgy appendix that haemorrhages a little more bile with each election.

If Mr Biden eventually prevails, he will inherit a profoundly divided country that will be hard to govern, especially if the Senate remains in Republican hands.

If Mr Trump loses, he will still have outperformed all expectations. The Republican party is Trumpian for the foreseeable future. “We are a working class party now. That’s the future,” tweeted Josh Hawley, the Missouri senator who has 2024 presidential aspirations. The American people have spoken. And it is a cacophonous noise.

Some Coloradoans Want to Break Off and Join Wyoming. They Should at Least Get to Vote On It. | Ryan McMaken

Get ready to return to a (very different) office

Diversification, M&A may lie ahead for New York Community under new chief

Some Coloradoans Want to Break Off and Join Wyoming. They Should...